“Is that what you’re wearing?”  The note of disapproval was unmistakable.

Immediately I was tugging the skirt down a bit and tweaked the shoulder straps, uncomfortable with how much skin was on the show, although it had looked fine upstairs in my wardrobe mirror.

“Don’t you like it?” I could feel my face and neck flush with anxiety. “I’ll go change.”

But the moment I turned to go back upstairs he replied brusquely, “We don’t have time. It looks fine.” I had never heard the word ‘fine’ sound so negative, but I shrugged my denim jacket around my shoulders and hurried after him, Jack wouldn’t wait for me, I scuttled behind him on my wedge heels.

When we got to the pub where the band was playing, Jack shouldered his way confidently in, letting me fend for myself. I was shy anyway, but his constant implications that my look was wrong made me wish I could disappear. I worked my way to the group of chairs where Jack was sitting, his cronies around him, there didn’t seem to be a seat for me so I hovered uncertainly at his shoulder.

“You gonna get the drinks in?”

He barely acknowledged me, but he was a creature of habit so I went to the bar, apologizing and weaving between bodies to stand and wait my turn. There was a new, younger guy serving tonight alongside Vick the big-bellied landlord. As he pulled pints and flipped caps off bottles of beer, he smiled at me and I felt a flutter of pleasure in the pit of my stomach.

I took his pint and my half-pint of lager back and put them on the table, already crowded with bottles and glasses. Then I located an unoccupied chair and dragged it near Jack’s. The band was going to start soon and I wanted a good view. It was only a tribute band but, they did covers of the Red Hot Chilli Peppers and the Darkness, weaving in some oldies from the 70s and they were really good.

It was a great show, I wanted to get up and dance, but I knew Jack wouldn’t dance with me, nor would he approve of me dancing alone. I tried to enjoy it as best I could, sitting in my seat and tapping my feet. The young bartender came and cleared the empties from the table to my right and he caught my eye again. 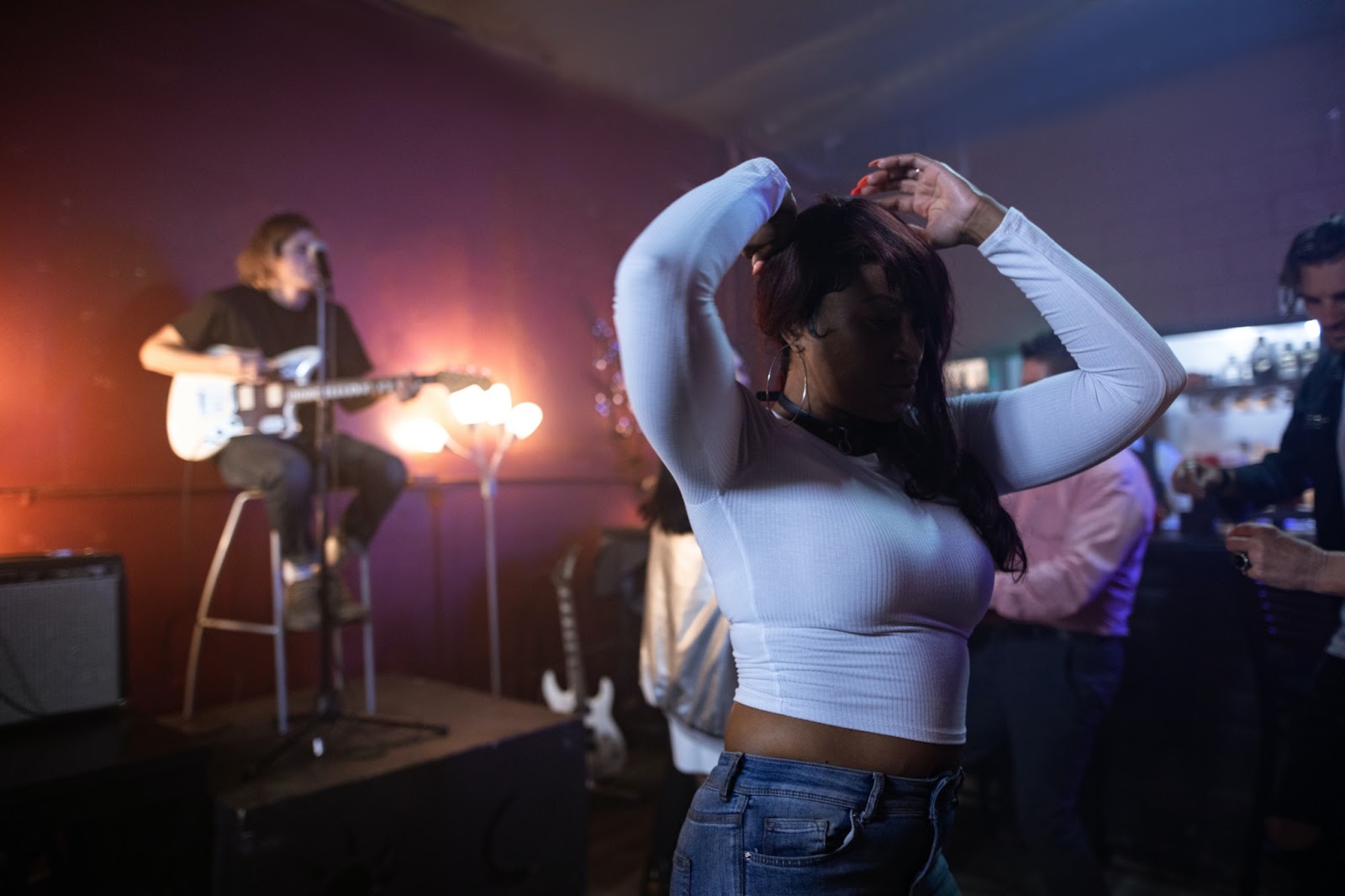 “Having fun?” he mouthed at me, and I smiled and nodded. It was nice to have that moment with him, but I turned my eyes to the band again, aware it didn’t take much to make Jack jealous. The longer I sat there, just behind Jack, not included in his circle of friends who spent the evening making snide remarks and swilling down their lager, the more I wondered what I was doing with my life. It had seemed exciting being asked out by Jack, he was a local bad boy with his motorbike and tattoos, and it was thrilling to be singled out by him and kissed until I felt giddy, his rough fingers roamed under my skirt and pushed into my panties to invade my moist pussy. This was my moment to shake off the goody-goody image my catholic school education had given me and I grabbed it with both hands! I ground up against him and pressed my face to his shoulder, faintly aware of the tang of sweat, and wondered when his touches would make me tingle and feel good, like when I did it to myself.

It wasn’t long, however, before I realized that there was nothing remotely rebellious about going out with Jack. His bike never left the garage, except one Sunday a month when he rode it out to a bikers cafe where the guys admired one another’s machines! His tattoos were crass, done on Southend Pier when he was drunk, the final letdown being he was really tight!  I always ended up paying for the drinks at the pub or the chips or Chinese take-outs we bought, then took back to my house to eat. Since going out with Jack, I spent more evenings on my own sofa watching TV than I had when I was single!

I felt trapped in this relationship with Jack, he was jealous and petty, disliking me to talk to other guys but barely bothering to talk to me himself. It was as if I was just an accessory to add to Jack’s look. I loved retro clothes and dressed as the girls did in the 60s, it’s one of the things he liked about me, or so I thought. I remembered that first night when his roaming hands had snagged my fishnet tights and he felt my thighs and my bum - his watch got caught - and he froze.

“Just rip them!” I’d laughed, so he had, tearing a great hole in the hypnotic lattice pattern they made, and then he snaked his hand in and started fondling and fingering me through the gash in the fabric. It had felt so illicit and urgent, and we had kissed until my red lipstick smeared.  He’d sucked and nibbled at my neck until it ached, making my pussy throb in response, then he’d popped the buttons open on my blouse and coaxed my titties out of the cups of my bra.  We were only down a side alley, and I could hear people passing and the thrill of fear at being seen acting like such a slut made my pussy hot and wet. 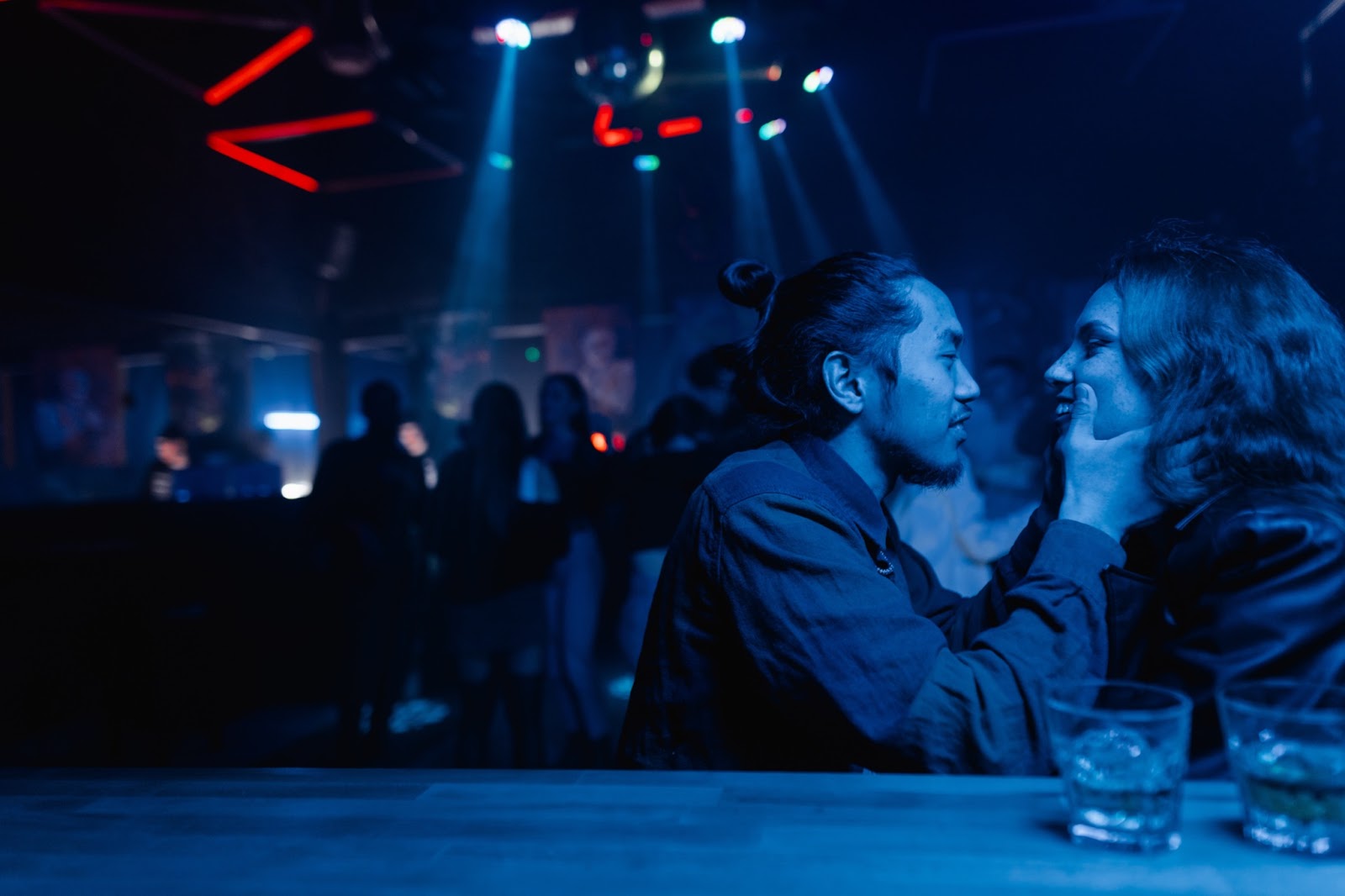 Jack had fumbled his flies open and released his cock.

“Suck me off!” he’d said, and I’d dropped to my knees right there.

My head was nearly exploding with excitement as I opened my mouth to tentatively touch his swollen dick with my tongue. I hadn’t ever done this before, but I’d read about it in books.  Jack seemed delighted with my technique, unaware that I was inexperienced. He urged me to suck it harder, sinking his hands into my hair to move my head faster, while thrusting his hips at me with increasing urgency. It got harder to breathe, as his cock was bumping the back of my throat, and each thrust buried my nose in the wiry hair at his groin.  Then suddenly he was cumming, and jets of warm sticky liquid was filling my mouth.  I was so surprised that I swallowed it down as if it was medicine, but I hoped I wouldn’t always have to, as I didn’t like it.

Thinking about it, was that the only thing Jack ever gave me?

He hadn’t yet managed to give me an orgasm and he claimed he never did oral sex. No, I’m wrong, Jack gave me the benefit of his ‘advice’ all the time, offering opinions on how I dress, what I should say to my boss, whether I should eat things or buy things - yeah he’s pretty generous in that department. It was all part of his plan to keep me down I suspected because the confident girl I had been when we first met was slowly shrinking, diminishing under the weight of his critical remarks.

Just then, Jack caught my eye and held out his empty pint glass at me.

“Time for another,” he slurred.

I took the glass from his hand, before standing up and smoothing my dress down over my thighs. Not because it was too short, but because I liked the way it clung to my figure. I straightened my shoulders and took my glass and Jack’s to the bar and waited there patiently until the young barman caught my eye and came over to serve me.

“Same again?” he said, raising his eyebrows at the 2 empty glasses I’d placed on the bar.

“No thanks. I feel like trying something different.  What d’you recommend?”

He looked at me appraisingly.

“You seem like a woman of taste, how about you try a gin and tonic?”

“Is that what you drink?” I asked as I looked up at him from under my lashes.

It was as if he changed gears then; realized I was out and out flirting with him and had the license to flirt back. “No, I drink whisky and coke.”

“We’re not really supposed to drink when we’re tending the bar, but my shift’s nearly over, so … yeah!  Thanks.”

He made our drinks and then came back and set them both in front of me, and we each picked them up simultaneously and took a mouthful. I felt the burn of the strong spirit and it was as if it triggered a release for me. I wasn’t going back to Jack, I wasn’t even going to tell him it was over - he could work it out for himself. I planned to explore new horizons, and as soon as I found out the bartender’s name, I was going to ask if he wanted to come with me!

Images from Unsplash and Pexels

Reality Gays: Trash TV and GayDD with Mattie and Poodle

What's Going On? With Addy & Diego

Why Do You Need a Free Appointment Scheduler?

What is FOSTA-SESTA: Factors and Impacts on Sex Workers and Sexual Wellness Professionals

Why Tickle.Life and Sexual Well-being?

Major Artists Who Made an Impact on Sexuality and Art

The Intersection of Art and Sexuality: A Historical Overview
More

Sex Fantasy Based on Zodiac Signs

How to Make the Most Out of a Sex Chat Conversation

How can you improve your sexual wellness?